Porphyry paving along with many additional amenities and design elements in Cincinnati’s Washington Park are recognized by a national organization. Each month, City Parks Alliance recognizes a “Frontline Park” to promote and highlight inspiring examples of urban park excellence, innovation, and stewardship across the country. The program also seeks to highlight examples of the challenges facing our cities’ parks as a result of shrinking municipal budgets, land use pressures, and urban neighborhood decay. The Frontline Park of the Month for June was Washington Park.  Porphyry paving material was supplied by Milestone Imports.
CITY PARKS ALLIANCE
City Parks Alliance is the only independent, nationwide membership organization solely dedicated to urban parks.  It unites and serves a growing network of hundreds of civic and community leaders, government agencies, parks and recreation authorities, and others.
City Parks Alliance was established in the fall of 2000 by a nationwide group of urban parks administrators and advocates. The mission of the City Parks Alliance is to engage, educate and nurture a broad-based constituency to support the creation, revitalization and sustainability of parks and green spaces that contribute to dynamic cities.

Located in the historic Over-the-Rhine neighborhood, Washington Park has been through its share of changes since the city first acquired the land in 1855, which was then being used a cemetery.  The park began construction in the 1860’s, adding features like footpaths, wading pools, bandstands, and other activities to draw visitors from the surrounding neighborhood.  The park and neighborhood entered a period of decline after the Great Depression and World War II, and by the end of the twentieth century, Over-the-Rhine had changed from a vibrant community to one of America’s poorest and most run-down neighborhoods.  Lack of investment led to the deterioration of many park features, and there was little inclination to make changes and improvements to the park.  With property values at rock bottom, developers purchased distressed properties and began the process of redeveloping Over-the-Rhine, which is believed to be the largest, most intact urban historic district in the United States. 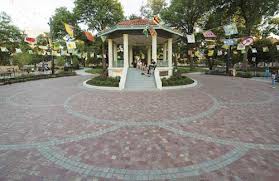 Reopened to the public in 2012, Washington Park has quickly become an anchor in Over-the-Rhine, and an integral part of the neighborhood’s remarkable transformation from urban cautionary tale to one of the best developments in the United States.  The park has spurred new economic development around it, and it now better serves its diverse community and a new population of visitors drawn to its extensive program of concerts, movies, educational programs and special events.
OVER-THE-RHINE
Over-the-Rhine (OTR) is Cincinnati’s oldest and most historic neighborhood, home to the country’s largest collection (943 buildings) of 19th-century Italianate architecture. Those buildings earned the entire 360-acre OTR neighborhood a 1983 distinction as an historic district listed in the National Register of Historic Places. The neighborhood’s name comes from German immigrants who built and settled there. Bridges over the Miami and Erie Canal separated the neighborhood from downtown Cincinnati, where many residents traveled everyday for work. In honor of their homeland, the area became known as Over-the-Rhine with the canal they crossed daily symbolizing the Rhine River in Germany.
CINCINNATI CENTER CITY DEVELOPMENT CORPORATION
The Washington Park makeover was lead by the Cincinnati Center City Development Corporation. 3CDC is a 501(c) 3, tax-exempt, private, non-profit corporation. Its mission and strategic focus is to strengthen the core assets of downt 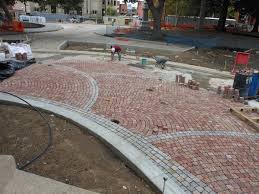 own by revitalizing and connecting the Fountain Square District, the Central Business District and Over-the-Rhine (OTR).
3CDC was formed in July 2003, recommended by a City of Cincinnati Economic Development Task Force as part of an overall system to increase the effectiveness and efficiency of development activities in the City of Cincinnati. Then Mayor Charlie Luken and members of the Cincinnati corporate community joined together to create 3CDC, agreeing that the economic future of Cincinnati depended first and foremost on a strong and vibrant downtown business and entertainment district.
Porphyry’s composition determines its high compression strength, resistance to stains, slip resistance, and high freeze/thaw ratings.  The stone is the most popular paver in Europe, and is favored for its flexibility in design, beauty, durability and low maintenance requirements. ADA Compliant Porphyry pavers are also adaptable to a permeable paving set. The stone is by far one of the most durable pavers in the world.  These beautiful materials are available from Milestone Imports.   Milestone supports the creativity of architects, planners and designers. Porphyry offers surfaces of various finishes and mixed colorings, tending towards tones of grey, gold, violet and red, depending on where it is extracted.  The products are available in North America from Milestone Imports.  –  www.milestoneimports.com