Porphyry like natural stone cobbles and setts are front and center in several of Waterfront Toronto’s projects, adding permanence, beauty and creating a fundamental sense of place. The role of natural stone is evident throughout many of the projects. Granite is used in these, but porphyry could be substituted for the same durable and attractive […]

Stone Streets  First published in 2000, by the Society of Chief Officers of Transportation in Scotland (SCOTS), Natural Stone Surfacing – Good Practice Guide, was responding to the following regarding their city center streets. “The techniques used in installing stone surfaces which perform well, vary throughout Europe.  They are based on semi empirical, traditional, guidance borne […]

The shape of the stone unit determines how the stone surface responds under load and the way in which the load will be resisted.  Certain shapes of units are better suited to particular forms of construction.  While they all can be appropriate for pedestrian use, driveway and city streets have tighter parameters to pay attention […]

A Porphyry installation video of a beautiful cobblestone pathway is educational. This short (2:21) segment showing two posers (layers) and a helper laying overlapping arcs with 4” (8-10cm) porphyry cubes, demonstrates an effortless seeming process of a traditional setting method that dates back centuries.  The stone setting skill of these two is highly refined and […] 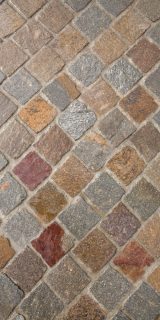 What is Porphyry? Porphyry has been used as a paving surface as far back as the Roman era.  The Romans used it because it had a naturally flat, durable surface and the stone was easy to quarry. Traditional porphyry is a variable thickness stone.  It’s a type of granite that has naturally extruded through the […]